I first started working with the incredibly talented singer-songwriter John Reid in the 90s just before he had a huge hit with “Push the Feeling On” with his band the Nightcrawlers (if you’ve ever been to a club in the 90s, you’ll definitely remember raving to that song). The songs we were writing at the time were a bit more Soul/RnB and, as house music was the new big thing, these tunes ended up on the back burner for a while. Quite a long while as it turned out!

After nearly 30 years, we dug deep into the soul vaults and found some of the old tunes we penned back in the 90s and added a whole raft of new songs in that old school vibe. We put out the digital release of John’s “Nightcrawlers Soul Sessions” earlier this year which came out to great feedback.

Our singles “All Night Long” and “Love Comes Around” both hit the number one spot on the UK Soul Chart and got a lot of love from all the best soul stations including Mi-Soul, Delite, Solar and Starpoint Radio. BBC Radio also gave us great support from DJs Paul Miller, John Leech, and the legend that is Tony Blackburn. 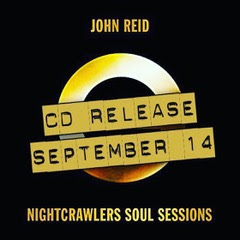 So I’m really delighted to share that anyone who wants to buy the “Nightcrawlers Soul Sessions” album in CD format, it’s available as of today at HMV, on Amazon and all good record stores.

And if you want to have a listen on iTunes or Spotify, you can tune in here.

I had a brilliant time co-producing this with my compadre, Ernie McKone of Boogie Back records fame. Between us, we played pretty much all the instruments, apart from horns - and everything is live which gives the album a really special feel. John’s vocal performances are stunning and you can see why he’s had number one hits for everyone from Leona Lewis (“A Moment Like This”) to Westlife (“Unbreakable”) and Tina Turner (“When the Heartache is Over”.

I’m really proud of this project and loved that Robert Elm’s compared some of it to Michael Jackson’s “Off The Wall”. Hope you enjoy it.

Posted by Michael J McEvoy at 11:26 No comments: