Christmas, New Year and beyond

Well we're now truly into the new year and the hope for springtime is creeping up...by beginning of February winter always seems to feel longer than it should be.
It's been a while since my last post - so here's a very quick catch up on what's been going on;
Had some great gigs with 70s funk band 'Push'.
The album was released in November and I've co-written the title track 'Band on a Mission' and 'Long Gone' which has the wonderfully soulful vocals of Hamish Stuart of AWB fame.
Here's a video put together by one of our fans... 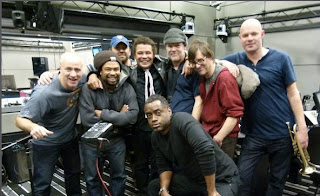 We also did a live BBC Radio 6 broadcast on the Craig Charles Funk and Soul show which you can find it here - just search for PUSH.
Push is great fun! All the guys are old friends and bass player Ernie McKone is a long time collaborator who I continue to do a lot of writing and producing with - he's an incredibly talented musician.

Besides that I'm scoring CBBC series Dani's House series 5. That will take me through to mid February, then it's straignt into an exciting National Geographic series about the Oceans with director Gary Jognstone. More on that later!
Posted by Michael J McEvoy at 09:51 No comments: