a wicked gig last night!
steve winwood at croprody - with a killer band; richard bailey (drums), jose neto (guitar), paul booth (saxes/flute) and carl vanderbosh (percussion).
mary (leay) and i went as guests of james towler who's steve front of house sound guy.
james is co-producing mary's album with me. a fantastic engineer who was given the award of 'Recording Engineer of the Year' from the Music Producers Guild for 2009 .

me and mary will be up at wincraft studios from the end of september to record more tracks for mary's album...
Posted by Michael J McEvoy at 12:26 No comments:

Email ThisBlogThis!Share to TwitterShare to FacebookShare to Pinterest
Labels: gigs

it's all going off! 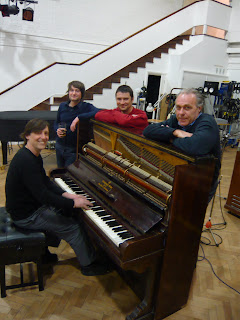 what can i say...it's been an incredible period.
'live from abbey road', finished my 'terra cognita' album and the score for upcoming feature film 'forget me not' - so now it's my time to rest for a minute or two...

the new 'live from abbey road' open title music was great fun - drums played by hugo degenhardt (of the bootleg beatles) and mixed by my man nick taylor (house engine at 'air-edel studios'). he came over to mix the piece at abbey road studio 2.
nick also recorded the piano and hammond b3 (apparently the same piano played by sir paul on 'lady madonna').