Apple Store Talk on 'Me and Orson Welles'

On Tuesday I did a talk at the Apple Store, Regents Street, about the process that took place while working on 'Me and Orson Welles'. They have a great series of talks with film makers and creatives - all free, on a first come, first serve basis. Go Apple Mac!!! 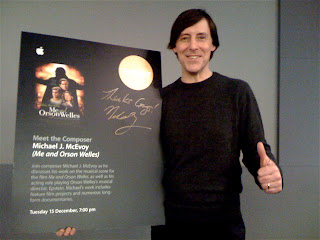 I had a lot of fun and it was well attended. Robin Lingwood organised it on the recommendation of one of my star pupils from Royal College of Music, Anne Chmelewsky, who incidentally has a credit on the film for her work helping me prepare parts and scores (thanks Anne!). Anne was there with another talented composer I taught, Maria Vatenia. It was nice to see some familiar faces and have some interesting, probing questions.

Darren Millard was  great help setting me up, copying my Keynote document and plugging me into the 'system' there - very together and well organised (am I surprised? Absolutely not! This is Apple we're talking about. I'd never use any other computer!). So thanks goes out to Darren.
Also, my Dad, Joseph P McEvoy, was there - as was my wife Tracey. My Dad has his book coming out on Constable Robinson on January 20th 2010 - 'A Brief History of the Universe' (from Ancient Babylon to the Big Bang), and I got an advance copy after the talk...a little light Christmas reading-:)

Thanks also to all the other people who came along - Segun, Egberto, and a special big thanks goes out to Olivia Dixon and Steve Molesworth from the 'Screen Music Network' who helped promote the event for me...nice one guys!
Posted by Michael J McEvoy at 11:18 No comments: